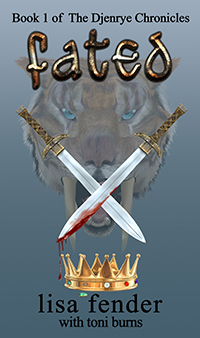 Fated: Book 1 of the Djenrye Chronicles 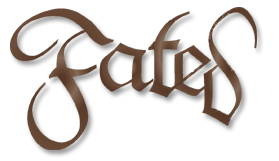 Fated carries the reader into Djenrye—a world parallel to our own. A dimension that is pristine and untouched by industry or pollution. Yet, despite all its beauty, Djenrye is in turmoil.

Phraile Highlae, the home of our heroine, Carlynn, is brutally attacked by a faction known as the Rebellion. She and her husband, Raynok—the city’s Guardian—are forced to flee for their lives and the life of their unborn child.

The rebellious faction is led by Dekren, who seeks to control both Djenrye and the parallel world, Terra-hun.

To do so, he requires the blood and power of a Guardian to be drained into Ty Ortehlae—the five Orbs which hold the balance of the earth. When Dekren’s soldiers kill Raynok in a vicious attack, the last Guardian becomes…the child of Raynok and Carlynn.

There is turmoil within Dekren’s ranks, as well. His Second in Command, Torren (whose name you should know from Fable), is planning a coup of his own. If he succeeds, he will take command of the Rebellion and, with any luck, Djenrye and Terra-hun.

With the aid of a Master Warrior, Ghorgon, Carlynn must escape the Rebels and overcome the dangers of the wilderness to find a safe haven for her infant. She is driven to the edge of her strength, willpower, and willingness to do whatever it takes to protect her child and prevent the destruction of both dimensions.

His story begins eight summers after Delyn and his family were moved from their hidden arbor community of Elm Toch, to a village the Gods had erected especially for the new race—the Andrones.

A handful of Androne’s and their Wood Elf families live in the town situated between the cities of the Djen. Mayza, the first female Androne, born two years after Delyn, is his only friend. Delyn is now fully grown and over a foot taller than the Wood Elves, his curiosity becomes an obsession. Why is he and the other Andrones different that their elders and siblings? Why did the Gods create them? What was the purpose?

He decides to spy on secret meetings between the God-Soldiers, who police the village, and the Forefathers, a race of beings sent by the Gods to govern all of Djenrye. Mayza warns him that to be caught would bring severe punishment—he could be beaten or worse.

He doesn’t listen and follows Brom, one of the Forefathers, to the meeting anyway. What he hears creates more questions and strengthens his conviction to find answers.

The clandestine meeting is only a preamble to a great gathering of all leaders. Djen, Mage, and the Forefathers are called to Delyn’s village to discuss matters which concern the Andrones and their role.

It does not go well for Delyn and the others. Rounded up by the God-Soldiers, all Andrones, male and female, are forced to go to Phraile Highlae by order of the Gods.

The first night of their journey the female Andrones were secreted away while they slept.  No one will tell Delyn where they have been taken. Scared for Mayza, but unable to fight the God-Soldiers, he has no choice but to continue on.

Once in the city he is told he will be trained as a warrior of the Gods. Delyn befriends Claren, a younger Androne from the village. As they begin their combat training, Delyn keeps a solemn promise to himself. He would continue to spy on their leaders for answers to their evolution and where the girls were being kept.

Several moon cycles pass and Delyn decides to escape from Phraile Highlae. He must find Mayza and rescue her, but the journey is short lived when he is caught. His punishment is to be carried out in a place he never knew existed.

He finds himself in an unknown hostile land, locked up like an animal, starved, and is forced to fight for his life. He holds on to an escape plan from this terrible place, but the abuse at the hands of his captors is changing him. His dream of freedom slips away as he becomes what the Forefathers want—a cold, hard, calculating soldier—of the Gods.